For the 2nd year in a row Anytime Fitness - the world’s largest and fastest-growing co-ed fitness club chain - has been ranked No. 1 on Entrepreneur magazine’s annual Top Global Franchise list.

Averaging more than 300 new gyms a year for each of the past nine years, Anytime Fitness recently expanded to China, Belgium, Sweden and Italy.  New gyms will also open soon in Colombia, Panama, Saudi Arabia and Bahrain. 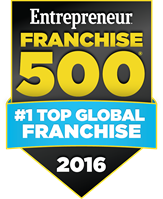 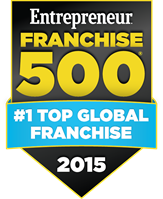 Alongside this accolade, Anytime Fitness has recently sold its 300th UK territory, just six years after launching in Britain. The business, which sold 98 territories last year, first opened in the UK in 2010 and there is currently 88 clubs trading across the country with a further 107 in the opening and negotiating pipeline. Already the 4th largest operator, Anytime Fitness is well on its way to being one of the largest gym operators in the UK.

To compile the most recent Top Global Franchises ranking, Entrepreneur started with each company's 2016 Franchise 500® score – based on system size, growth rate and financial strength and stability – then adjusted to give extra weight to international size and growth rate.

Brett Edwards, General Manager, Anytime Fitness UK, says, “We’re delighted to be named the #1 Top Global Franchise for the second year in a row. The announcement co-insides with reaching the milestone of 300 territories sold here in the UK, which only strengthens our National and international presence. As the organisation continues to grow we are accelerating towards our target of 550 clubs open by 2020.”

Chuck Runyon, CEO and co-founder of Anytime Fitness, says,  “This designation as #1 Top Global Franchise is a credit to our international franchise development team and our fabulous group of international master franchisees.

“Whether it’s the UK, China or Japan, our franchisees are providing our members with personal service that gets real results.  That personal touch and high level of engagement is what differentiates Anytime Fitness from many other gyms and what has strengthened and grown our brand worldwide.”

The Anytime Fitness franchise model is attracting a wide range of franchisees from  the food sector, multi-site franchise operators, couples wanting to start their own business and young entrepreneurs to name a few. All these investors have something in common - a desire to be involved in the growing fitness sector and to run a successful profitable business. It is fair to say that very few actually come from the fitness sector so rely on the proven model and support of Anytime Fitness’ 30 strong UK support team.

More than 29% of Franchisees now own one territory or more and this year 40% of new territory sales are to existing franchisee’s wanting to grow their portfolio, testament to the success they see both financially and in their work life balance.

Last year saw the opening of the 3000th Anytime Fitness club globally, in Stroud, Gloucestershire making it the fastest growing fitness franchise business in the world. Later this year the organisation is set to open its 100th UK club.

Anytime Fitness focusses on offering members what they really want; convenience, affordability, quality equipment and a personable service in a friendly, non-intimidating environment.

The franchise now has agreements in 29 countries around the world and more than 2.5 million members.

Anytime Fitness is unlike any other health club.  Big enough (typically 5,000 sq. ft.) to provide top-notch equipment and programming, while small enough (average of 825 members per gym) to provide members with personalized coaching and support, Anytime Fitness members and franchisees feel so good about their gym experiences that more than 3,000 have actually tattooed themselves with the company’s Runningman logo.  Additionally, after completing the journey to a healthier lifestyle, dozens of members and franchisees have proudly waved Anytime Fitness flags or worn Anytime Fitness tee-shirts atop mountains as high as Everest and Kilimanjaro and at historic sites like the Great Wall of China and Machu Picchu.

“Considering the reputation of the other franchises ranked in the top 10, this is a tremendous honor for Anytime Fitness,” said John Kersh, VP of International Development for Anytime Fitness.  “One of the keys to our success is that our business model works virtually anywhere.  Individual franchisees are able to make a good living while providing affordable and much-needed services to people in their respective communities.”

Other countries where Anytime Fitness hopes to reach development agreements in the near future include Germany, France, South Korea, Brazil and South Africa.

“Anytime Fitness was founded on the idea that exercise should be as convenient and rewarding as possible,” said Dave Mortensen, co-founder and president of Anytime Fitness.  “We’ve eliminated all of the most common barriers to healthy lifestyles and, by constantly finding new ways to help our members realize meaningful results, we’re well on our way to achieving our goal of helping as many people as possible get to a healthier place.”